Below are depictions of the bottles, side by side with their alleged infringers. 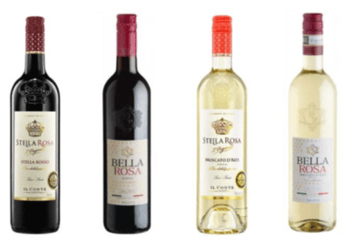 In response, Enovation claimed that Stella Rosa’s trade dress elements, in isolation, or even in some combination of a subset of them, are shared by dozens or hundreds of other wines and should be considered generic. The court found Enovation’s argument unpersuasive. In its order granting San Antonio Winery’s expedited motion for temporary restraining order, the court stated that “the unique combination, inclusion, and arrangement of these elements that renders the Stella Rosa dress distinctive.” Ultimately, the court found that “[w]ithout more, particularly in light of San Antonio’s ‘417 and ‘013 federal trademark registrations, Enovation has not overcome the showing that San Antonio’s trade dress is inherently distinctive.”

Applied Marketing Science (AMS) has extensive experience conducting surveys to measure secondary meaning and likelihood of confusion in trademark and trade dress infringement matters. Our surveys have been submitted and accepted as evidence in litigation matters involving a broad range of products and services. To learn more about AMS trademark survey experts and our Litigation Support services, please contact Jason Och at joch@ams-inc.com.